Maker of the Month: K’era Morgan 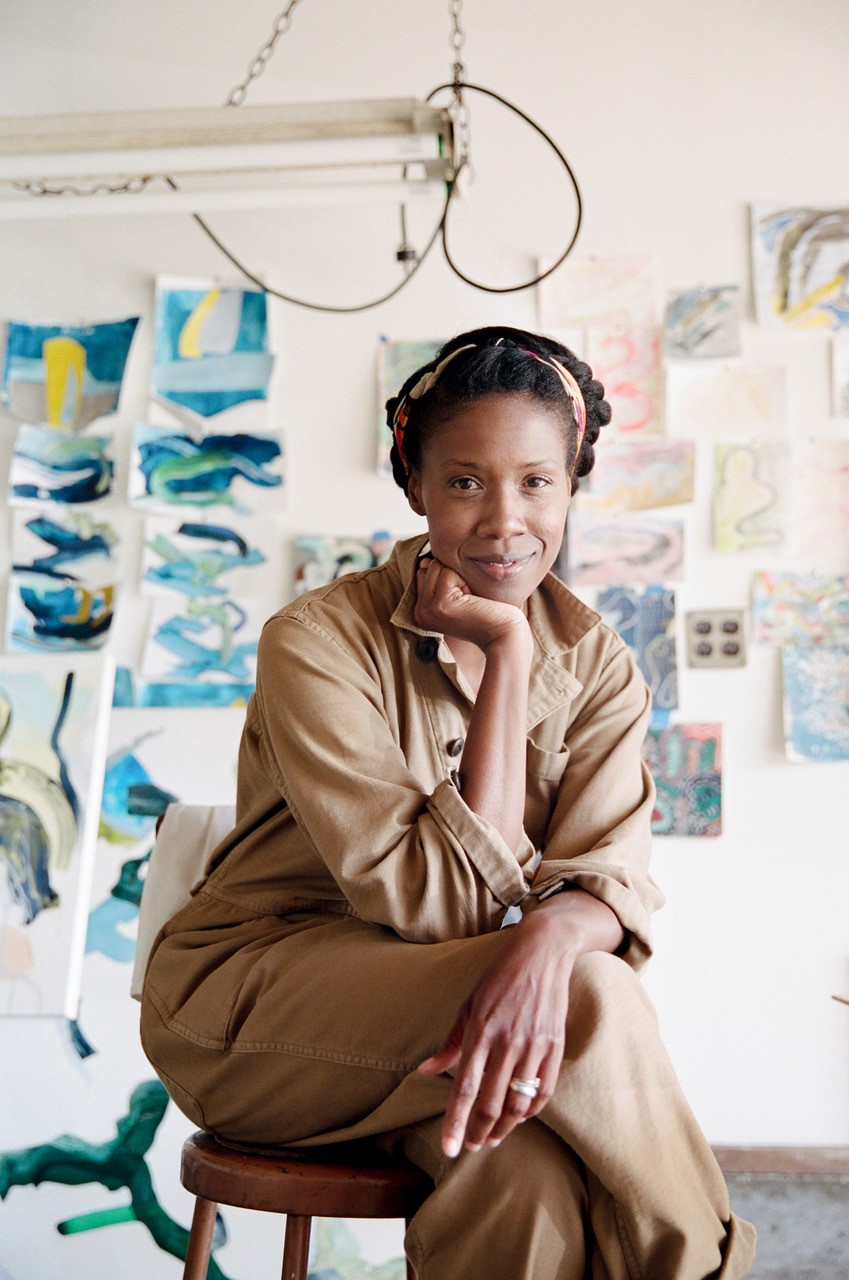 The bold colors and mark-making of K’era Morgan’s artwork are immediately eye catching. K’era, a mixed media artist based in LA, uses an intuitive creative process to gather ideas and patterns around her and transform them into new visual stories.

Some of those stories are told through paintings, but K’era also leans into her training as a textile designer to tell them through home good items like blankets and pillows. Her first collection of hand-woven blankets resonated, and she’s since launched her k-apostrophe line to bring artful, made-to-order décor to customers globally.

She’s passionate about the way artful décor can transform a space and affect the way people feel.

“I think about going back to our ancestors who made things that become heirlooms, that you’d keep and pass down,” K’era said. “When it’s artful, there’s an inherent sense of value and craftsmanship that can be appreciated, so it’s treated as such. In the long term, it has a positive effect on the environment, and it’s more socially conscious. And it’s beautiful! Having beautiful things around you is a reminder that life is good. There are good things out there. It has a positive effect on you even though you might not realize it.”

Take a look at K’era’s gorgeous work at www.k-apostrophe.com, and read on for our Q&A.

What’s your favorite thing about your hometown?

This is probably more specific to California (she’s originally from the Bay Area), but I love the proximity to a variety of terrain. I can go to the beach and go skiing in the same day if I wanted to. You have the desert, too. The beauty you can access from a nature perspective is amazing.

What’s integral to your work as an artist?

I’ve noticed that there are times when I have a high level of productivity, and times when I don’t, but that’s not to say it’s a down time. In our society we’re so tied to producing and doing and going and making, that previously if I wasn’t doing that, I felt like I wasn’t being proactive. And that’s not necessarily the case. I’m not always creative. There are things I do to foster that and maintain that habit, but I there are times I realize it’s not a day to go to the studio to try and push through a painting. And that relates to space too, to know I’m not in the right state of mind to paint, or I am.

What’s an example of a type of art, or an artist, outside of your medium that inspires you?

I’ve been really inspired overall by functional vessels and sculptural items. Because I tend to work in a 2D format, I have a fascination with things that are 3-dimensional, that I can walk around or hold in my hand and spin around. There’s something about that experience that’s really captivating to me.

There’s a sculptor, Reinaldo Sanguino – he does these beautiful stools and benches out of ceramics, but he also paints on them in a free form or expressionist way, and I’m really drawn to his work. Julie Bolaños-Durman is a sculptor who does assemblages with found objects, and she works a lot with glass. She’ll take a champagne glass and a glass water bottle and an empty toothpaste tube. It’s beautiful. And I’ve never seen someone do assemblage work with glass like that.

What’s the earliest piece of artwork that you made that you remember?

I don’t know what grade I was in – maybe 3rd or 4th grade – I remember learning macrame in Miss Gillian’s class. I made this macramé owl that was all white, and I think I used shells to make the eyes. It was a very sophisticated project, and I remember her telling me it was very ambitious. And I did it. I gave it to my dad for Christmas. I think he still has it.

So low and behold, I was working with fibers! It was written in the stars.

Do you collect anything?

Yes, a lot of things. Recently I’ve started to collect loungewear. I collect paper for my work. Crystals and stones. And things with serpents on them – I have a fascination with serpent symbology.

A new studio space. My current studio is very convenient – I converted my garage into it – but I need to expand.

What’s a place you long to return to?

I’m going to say Brazil. I’ve spent time in Rio and Sao Paolo, but it’s such a big country and there’s so much that I want go back and visit.

What’s the last meal you consumed that really impressed you?

This is a home cooked meal, at a friend’s home. Our neighbor is an amazing cook. He makes his own butter, for goodness sake, and bakes bread, and for this dinner he brought out the Le Creuset and made a coq au vin. It was spectacular. And this was a while ago – I’ve had a few meals out since then, but I’m still remembering that one.

What’s a mistake you’re glad you made?

Going to Barcelona to learn Spanish. There are regions of Spain where Spanish is not the first language, and lo and behold, that’s the case for Barcelona. So it wouldn’t be my first choice had I known, but I wouldn’t have met my husband if I hadn’t gone.

Overall, people that have really found the courage to find their own path instead of staying on the safe one or the one that they were told they should follow. There are so many individuals I can name, but overall, people who are doing their thing and working at it. Cause it’s hard, and it’s scary.

What should people do more often?

Seek out stillness or time to just be. We are human “beings,” but we spend a lot of time “doing”.

What should people do less often?

Worry about what other folks are doing and what other people have going on.

Coffee/espresso/tea or none of the above?

Tea. Preferably a really good spicy chai. I wish I could do coffee because of the way it smells, but it gives me the shakes like nobody’s business.

Keep up with the latest news from Porter.